My THIRD SQL Saturday of the year is behind me.

I spoke in Tampa #32 and South Florida #40 earlier this year.

Jack Corbett(@unclebiguns), Andy Warren(@sqlandy) and their volunteers did another EXCELLENT job on this event.

The constant updates from Jack on the event via e-mail and twitter.

The large schedules on the wall in the hallways even though I stayed in the PowerShell room most of the day.

The ScriptingGuy statue that @MaxTrinidad got as a gift. He wouldn’t let me touch it.

The tweet from the @ScriptingGuys while I was doing my session “Why Learn PowerShell” asking if I wanted to do a guest blog post for the Scripting Guy blog.

How about “If the Original Cylons Had Learned PowerShell, Would They Have Been replaced by CGI?”. 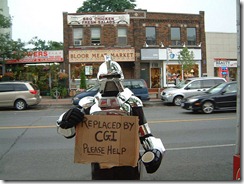 @z_williamson’s tweeting the color commentary for the sessions he attended. Beware don’t make a mistake when he’s in the room. One of the presenters had an incident with a lack of power to his laptop and blurts out “Don’t tweet that!”.  Too late, z_williamson had pulled the twitter trigger well before. I hope he’s going to the PASS Summit to provide coverage. I’d also like to thank him for taking pictures during my sessions.

The sponsor area.  Need to find another table arrangement that reduces the bottleneck in the  hallway.

Not enough Ninja T-shirts to go around. Seriously.  LOL. No, I’m kidding.

Hey, Tampa. Let’s do a Kung-fu SQL Saturday in 2011. Orlando is going Ninja next year.

The 2010 PASS Summit in Seattle is next for me. @RonDBA will be there.

I can’t say enough how valuable the SQL Saturday concept is for networking and staying current on SQL Server. If you want to get ahead, you need to attend.